For the first time in history, people face a huge global challenge to come to agreement on:
How to make entire society involved in reduction of CO2 emissions?

People have always wanted, want and will want to meet their needs at a minimum cost.

We cannot change people, but we can change the rules.

If economic behavior becomes ecological, the protection of the planet becomes a matter of course. Everyone is involved in protecting the planet’s climate. Even those who are not interested in the global problem.

How to fairly charge what harms the planet? Taxation of the primary cause of CO2 emissions – carbon in fossil fuels – at the time of extraction.
The rest will follow as a result.

James E. Hansen, former director of NASA’s Goddard Institute for Space Studies, the world’s foremost climate scientist, and leading economists of the World Monetary Fund agree that the most effective tool is to establish a price of CO2 emissions and tax carbon in fossil fuels (coal, oil , natural gas) directly at extraction.
Several countries already have a national carbon tax in various forms, and many others are considering its introduction. This is great, but it will also bring enormous complications, especially associated with export and import. Such complications would be avoided if the fossil carbon tax was set globally, as suggested by the Nobel Prize economist William D. Nordhaus and physicist Dr. Jiří Svoboda, author of this article.

The basic concept of national carbon tax and 100% dividend for the US was proposed more than 10 years ago by above mentioned James E. Hansen. Hansen suggests that a tax should be imposed on all carbon contained in fossil fuels extracted in or imported to the country.

This tax will be evenly distributed to people in the country (100% dividend) to compensate for price increases by taxing fossil carbon. In trade with countries with a different of no carbon tax the Border Carbon Adjustment will be implemented as a customs tariff. However,  this is a desperately complex procedure.

In addition, calculating and performing different border carbon adjustments between different countries means exponential growth in administration. Thus, it can be expected that the adjustment will only take place on the most carbon-intensive commodities and products, making the system leaky, similar to the Emission Trading System (ETS). This will put pressure on political and official decisions, which is a breeding ground for clientelism and corruption. Another problem is that if a carbon tax on the extraction of fossil fuels is levied at national level, the countries with a  huge production of fossil fuels (e.g. Saudi Arabia) will drastically benefit from the tax. Conversely, low-emission countries (e.g. DR Congo), where fossil fuels are not extracted, do not have any chance to raise funds from the system to address the often serious consequences of climate change that they did not themselves cause.

The system of national carbon taxes cannot therefore be regarded as solidarity from a global perspective. There is a danger that the simple end efficient idea of ​​a carbon tax, inconsistently implemented only nationally and not on extracted carbon, will be condemned by citizens and the government due to mentioned complications (see Australia, 2014).

According to a study by the World Bank and the International Monetary Fund (2015): „call for something like single global price that would guide these policies“,  it is not proper taking the path of different national carbon taxes and losing precious time. Instead the Heads of all countries should join their forces in favor of a uniform progressive global carbon tax & 100% dividend.

Tax collection.
Mining companies worldwide levy the prescribed tax on all the mined carbon to a Global Climate Fund managed, for example, by the International Monetary Fund (IMF) or the World Bank (WB). Mining companies will trade fossil fuels at prices with the uniform global tax included, and manufacturers will purchase all fossil fuels at higher cost. Each end product will then reflect its true carbon footprint in its price. This trick does not require any calculations, it is simple, fair, accurate and without complicated administration.

Proposal of tax rate and of its progress.
To allow the world economy to adjust and to provide motivation the tax need to be increased gradually. The carbon tax needs to start at a rather low level and be increasing according to an agreed, pre-announced medium-term scenario (say 10 years). As fossil fuels become more and more expensive, they will be used less and less, and their exploitation will stop in the currently least profitable sources. This will be the most gentle approach to mining companies, when the market and the well-known carbon tax progress scenario will provide them enough information to decide for themselves which resources to shut down. Investments in fossil fuel extraction become non-promising, banks stop
financing these projects and governments stop their support. Products with a high carbon footprint will become more and more expensive, gradually disappear from the consumer basket of almost all people and stop being produced.

The initial rate of the global carbon tax and its progress would be the subject of political debate at global level.

For example, the initial tax rate will be set to $ 35 * per ton of extracted carbon (about $ 10 per ton of CO2) and its progress will be $ 35 per year. Such a tax scenario is based on the desirability of reducing global CO2 emissions from burning fossil fuels to around 1/10 by 2050, and such progressing tax has a god prospect to meet this requirement. The amount of carbon in coal, oil and natural gas is known and burning 1 ton of carbon produces almost 4 tons of CO2. 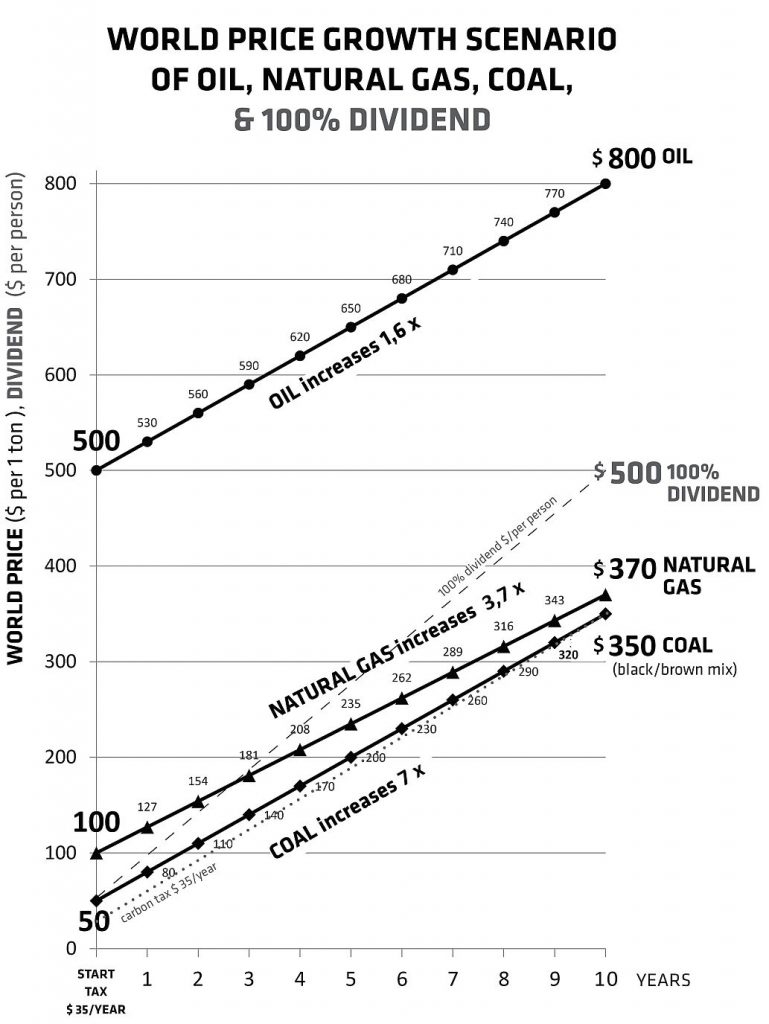 Any market-distorting subsidies for renewables or other selected low-carbon measures will be fair to abolish. Emission-free resources become soon or later competitive to more and more expensive fossil fuels and they will be spontaneously invested. Their research and development will accelerate even without any subsidies. 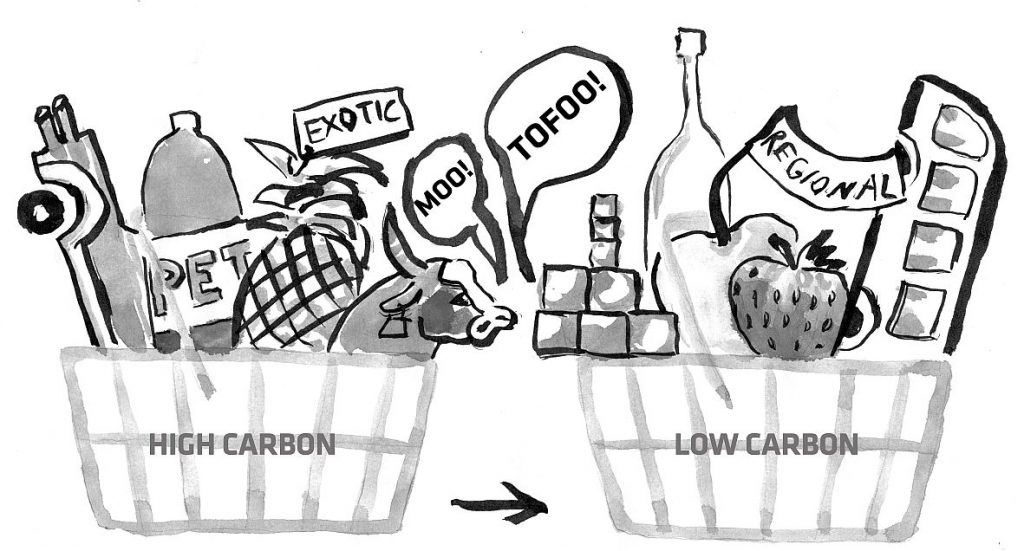 What to do with the collected tax?
100% dividend to offset price increases by taxing fossil carbon.
Dr. Svoboda in accordance with Dr. Hansen and with the latest IMF report (FISCAL MONITOR, OCT 2019, How to Mitigate Climate Change) proposes that the tax collected be distributed to all countries according to their population with the recommendation* that it is the best to distribute the collected tax uniformly to all citizens of the country or in similar socially beneficial means.

* Payments to the countries found in violation with the tax distribution recommendations will be suspended and retained in the Fund until the appropriate use of the tax is guaranteed. This can have a positive effect on countries with an unstable or undemocratic regime. 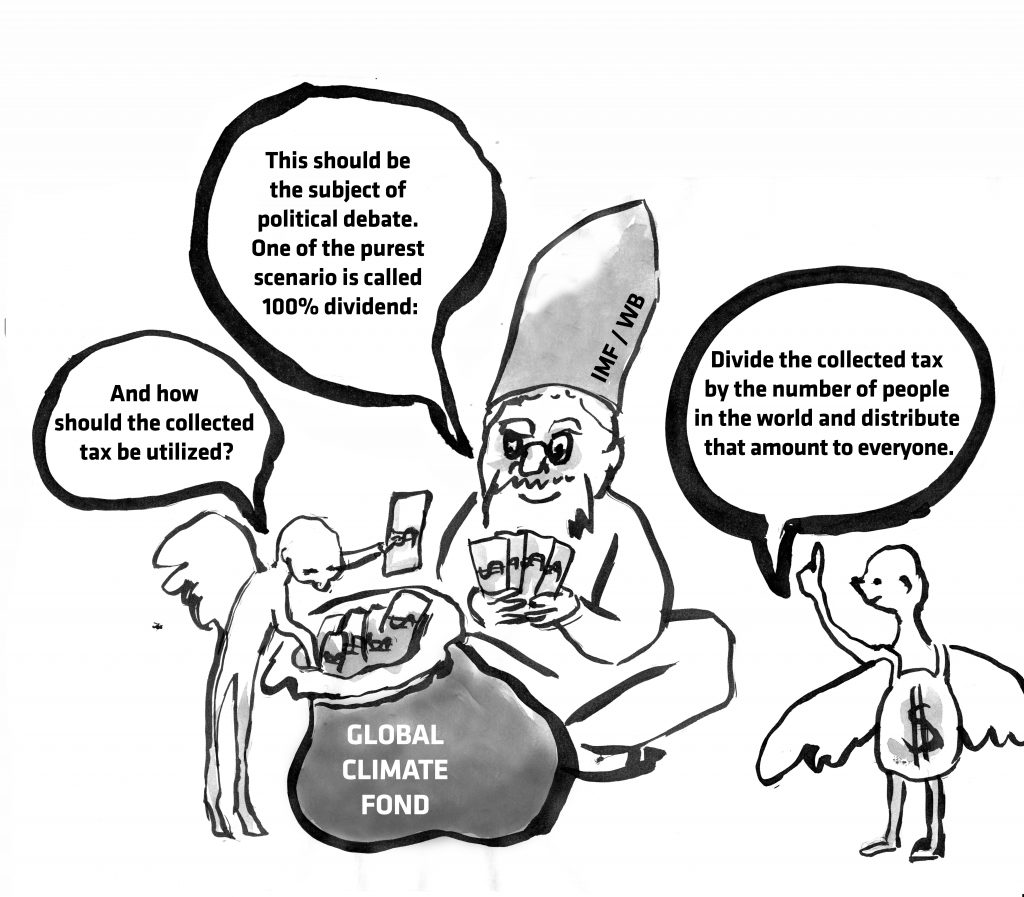 Countries could use the existing system to pay dividends (e.g. bonus to salary, pension, social benefit or income tax reduction). As the carbon tax will grow gradually from a small value, possible mistakes in the system will initially have no serious consequences and there will be sufficient time to fine-tune the system functionality.
Consumers and countries with below-average carbon footprint (most in the world) will benefit from such a system, those with a high carbon footprint will have a loss. There will be a net flow of money from high-carbon to low-carbon consumers and countries. If the carbon tax increases annually by $ 35, after 10 years everyone in the world will receive an annual dividend of around $ 500 (see chart). At this rate of carbon tax progress, coal use can be expected to cease within 10 years, and oil and gas consumption will be significantly reduced in 20-30 years.

Why could we all enjoy a global carbon tax and 100% dividend?

The UN could propose a Global Carbon Tax and 100% Dividend as a very effective climate protection tool, discuss it with experts and promote it to the leading politicians at COP 26 in Glasgow (2020), and win universal recognition.

The concept of a global carbon tax and 100% dividend can become a unifying element of the contemporary world!